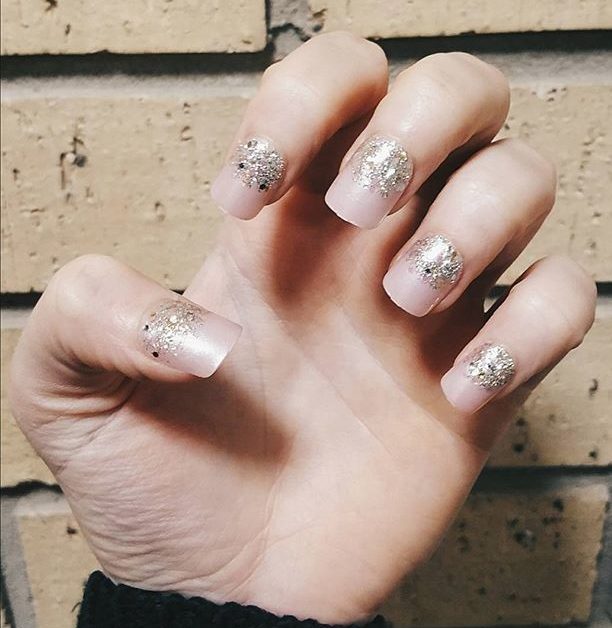 I’ve been having a bit of a nightmare with my nails of late, I say a bit, they are in an utterly dreadful state. After falling madly and deeply in love with acrylics, I soon discovered the sorry state that they had left my nails in.

I am now in the process of attempting to grow them naturally. So, when I came across the ImPress stick-on nails, I was rather excited. My initial reaction was how pretty they were – everyone loves a bit of glitter – and how lovely the nail varnish bottle shaped packaging they came in was.

Taking them out of their rather cute casing, I cleaned my nails with the provided wipe, roughened their surface a little with the inclusive file, and peeled off the plastic tab on each nail. Application of the nails was an utter breeze, with each nail firmly sticking on due to its gelled backing.

SO, What did i think of the stick-on impress nails?

They look absolutely wonderful on, and I wish my nails could actually look this pretty daily! Although seemingly secure, unfortunately, I did lose a thumb nail by day two and had to seek out some nail glue elsewhere. Although I salvaged it and reapplied the nail, it was a shame that it hadn’t lasted its promised week.

However, the rest have been very secure, and I do partly blame my long hair for catching the nails and teasing them up. This isn’t overly practical for someone who commutes in rush hour within London daily – my hair is literally everywhere.

Overall, I am very impressed with the ImPress nails, the selection available is extensive – and fabulous – and they really are a great alternative to acrylics and gels. I have found them to damage my nails so terribly now that I will probably avoid them all together now. If you are looking to grow your nails without damage, ImPress nails are for you.

Have you tried ImPress nails? What do you think of the ones I have chosen?
Stephanie xox